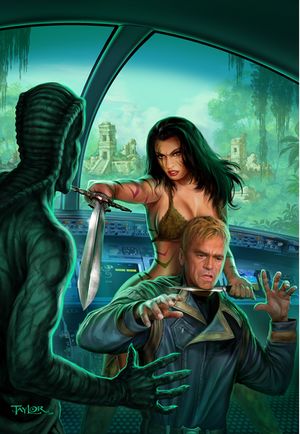 With the stolen glider, Aran Kormak finally gets a chance to take revenge on Commander Drax. He manages to track his nemesis down to Numbeeg (aka modern Nuremberg), but his surprise attack doesn’t go as planned when Aruula reaches for the Bodyswapper... Matt and Aruula also investigate a parallel world area in Coellen, formerly the city of Cologne. There they meet an alternate version of their dead friend Rulfan, who leads a resistance against Daa’mures. Unfortunately, they also come across an alternate version of Matt’s dead nemesis Professor Jacob Smythe! Meanwhile, in 1942, director Harry Paul Liebwerk prepares to shoot his cinematic magnum opus, “Inside the Demon Crater”, featuring the seasoned actress Greta von Bonnier. But when they travel to the filming location, billowing lights appear and real lava dragons emerge from the craters!